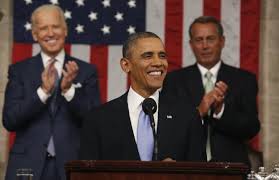 Last night President Obama called for increasing the capital gains rate on couples making more than $500,000 annually, to 28%. The President’s tax plan would also require estates to pay capital gains taxes on securities at the time they’re inherited and slap a fee on the roughly 100 US financial firms with assets of more than $50 billion.

Much of the $320 billion in new taxes and fees would be used for measures aimed at helping the middle class, including a $500 tax credit for some families with two spouses working, expansion of the child care tax credit and a $60 billion program to make community college free (information obtained from Julie Pace of the Knoxville News Sentinel – Jan. 21, 2015).

“Will we accept an economy where only a few of us do spectacularly well? Or will we commit ourselves to an economy that generates rising incomes and chances for everyone who makes the effort?”

Regarding taxes, the Bible tells us that Government has a right to collect taxes to carry out its responsibilities. It is the duty of citizens to pay taxes (Romans 13:7; Mark 12:17).

But, should wealthier people pay a higher percentage in taxes than others?

Obama has and is continuing to propose this. Based on the explicit patterns of taxes and tithes found in the Bible, there is no justification in the Bible for a ‘progressive’ tax rate, taxing one class more than another.

Although we are not living in Old Testament times, we can still learn a lot from how the nation of Israel did things under God’s rule.

There were examples of taking care of the poor (Lev. 12:18; 23:22; 25). Also, the land was not private property to be bought and sold (Leviticus 25:23). One example gave a provision for someone who earned a very small amount of income to pay only a small amount of tax (Lev. 23:22). The important thing to note here is the person still paid a tax.

People were required to pay a tithe in Israel (Deuteronomy 14:22-23; Leviticus 27:30-32). This system was like a flat tax where everyone paid the same percentage. When an extra census tax ('head tax') was given, each person had to pay the tax in the amount of half a shekel (Exodus 30:13-15).

I'm concerned with the President's proposals of taxing the wealthy more, at an unfair rate.

Some people may ask, “Isn’t it fair for the rich to pay a higher percentage?”

“On what basis can we decide what is fair? People may have subjective preferences or emotional preferences for one rate or other being ‘fair’, but those preferences will often be influenced strongly by self-interest rather than by some objective standard of fairness.”

“But the question then must be asked, how do we decide what someone deserves? Do we really believe everybody somehow deserves the same amount of money to live on in the end? There is a far better solution to the question of what each person ‘deserves.’ The solution is: Each person deserves what he has legally and fairly earned in each year (Luke 10:7; I Corinthians 3:8; Luke 19:13, 17).” - Wayne Grudem (Politics According to the Bible - pp. 285-209).

We can learn a lot from the Bible about what is right and fair.

Claude, thanks for your comment. You are correct in saying that not all of us in the US who work hard thrive from a financial standpoint. I know of many hard working people who don't make a large amount of money but who are happy. This could be considered thriving, when you are doing what God has called and gifted you to do.

Loving God involves supporting government in the sense that we are asked to submit to and pray for our leaders whom God has given us. I don't disagree we need to take care of the poor and disenfranchised, but I don't agree with continuing to tax the wealthy more and more. I believe the Bible teaches that it is right and fair to give people what they legally and fairly earned. I'm concerned we are taking too much away from the wealthy. This, to me, is unBiblical and unfair.

Claude, How about Obama and his administration spend the money they currently take in responsibly before taking anymore from those who do pay taxes?

On the face of it I find your arguments specious and finite as well as outside my understanding of Jesus' teaching. We enjoy tremendous freedom in the USA to thrive but not all who work hard thrive. In fact we tend to subsidize corporate profit at the expense of labor. To those whom much is given so will much be asked. Loving God also means sharing and supporting civil government.