The topic of pain and suffering is something we all wrestle with from time to time, especially when we're going through something difficult. If you are hurting right now, God is a God of loving promises. He promises that He is the God of all comfort to us (2 Corinthians 1:3-7), and that He will never leave us or forsake us (Deuteronomy 31:6; Hebrews 13:5). Be encouraged that God keeps His promises.

In order to address the topic of suffering, we need to answer three questions:

The Bible teaches that pain and sin came from a historical event, through human choices to disobey God (Genesis 3:1-24). Originally God created everything, and everything was good (Genesis 1:31). We don't know a lot about the origin of Satan, but there are passages that may allude to how Satan and his angels fell from Heaven because of their pride and wanting to be greater than God (2 Peter 2:4; Jude 6; Isaiah 14:12-15; Ezekiel 28). Satan was in the Garden with Adam and Eve and tempted them to eat the forbidden fruit from the Tree of the Knowledge of Good and Evil.

Adam and Eve could have continued eating from the Tree of Life and lived perfectly, but they chose to eat from the Tree that would allow sin and death to enter the world.

The source of evil is not in God's power but in man's freedom as he was able to sin, and he chose to sin.

2. How Could God Create a World & Allow Suffering?

Some people would claim that because there is suffering in the world, there must not be a God. If you don't believe God exists, evil still exists, and disbelieving in God does not make the problem of evil easier to solve.

God is an all-powerful, all-knowing, and all-good God. He knows what will result from our suffering. He can turn difficult things into good, even when we don't see it (Genesis 50:20).

"Not only so, but we also rejoice in our sufferings, because we know that suffering produces perseverance; perseverance, character; and character, hope. And hope does not disappoint us, because God has poured out His love into our hearts by the Holy Spirit Whom He has given us."

3. Does God Care That I'm Hurting? 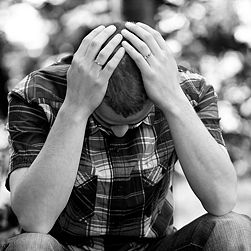 When we're struggling through pain and heartache, it's easy to think God doesn't care.

Last week we reflected on Easter week, remembering what Jesus did for us. We were reminded that the Christian God put Himself on the cross of human suffering by being tortured and murdered. Jesus showed us firsthand what it's like to suffer. He was in despair, was rejected, lonely, and beaten (Isaiah 53:5). For more on how Jesus suffered, check out my latest sermon titled "When Darkness Reigns."

The beautiful thing about Christianity is that we believe in a God Who can relate to us in our weaknesses and our struggles (Hebrews 4:15).

"I could never myself believe in God, if it were not for the cross...in the real world of pain, how could one worship a God who was immune to it? I have entered many Buddhist temples in different Asian countries and stood respectfully before the statue of Buddha. His legs crossed, arms folded, eyes closed, the ghost of a smile playing round his mouth, a remote look on his face, detached from all the agonies of the world. But each time after a while I have had to turn away. And in imagination I have turned instead to that lonely, twisted, tortured figure on the cross, nails through hands and feet, back lacerated, limbs wrenched, brow bleeding from thorn-pricks, mouth dry and intolerably thirsty, plunged in God-forsaken darkness. That is the God for me! He laid aside His immunity to pain. He entered our world of flesh and blood, tears and death. He suffered for us. Our sufferings become more manageable in light of His. There is still a question mark against human suffering, but over it we bodly stamp another mark, the cross which symbolizes divine suffering. The cross of Christ...is only self-justification in such a world as ours (The Cross of Christ)."